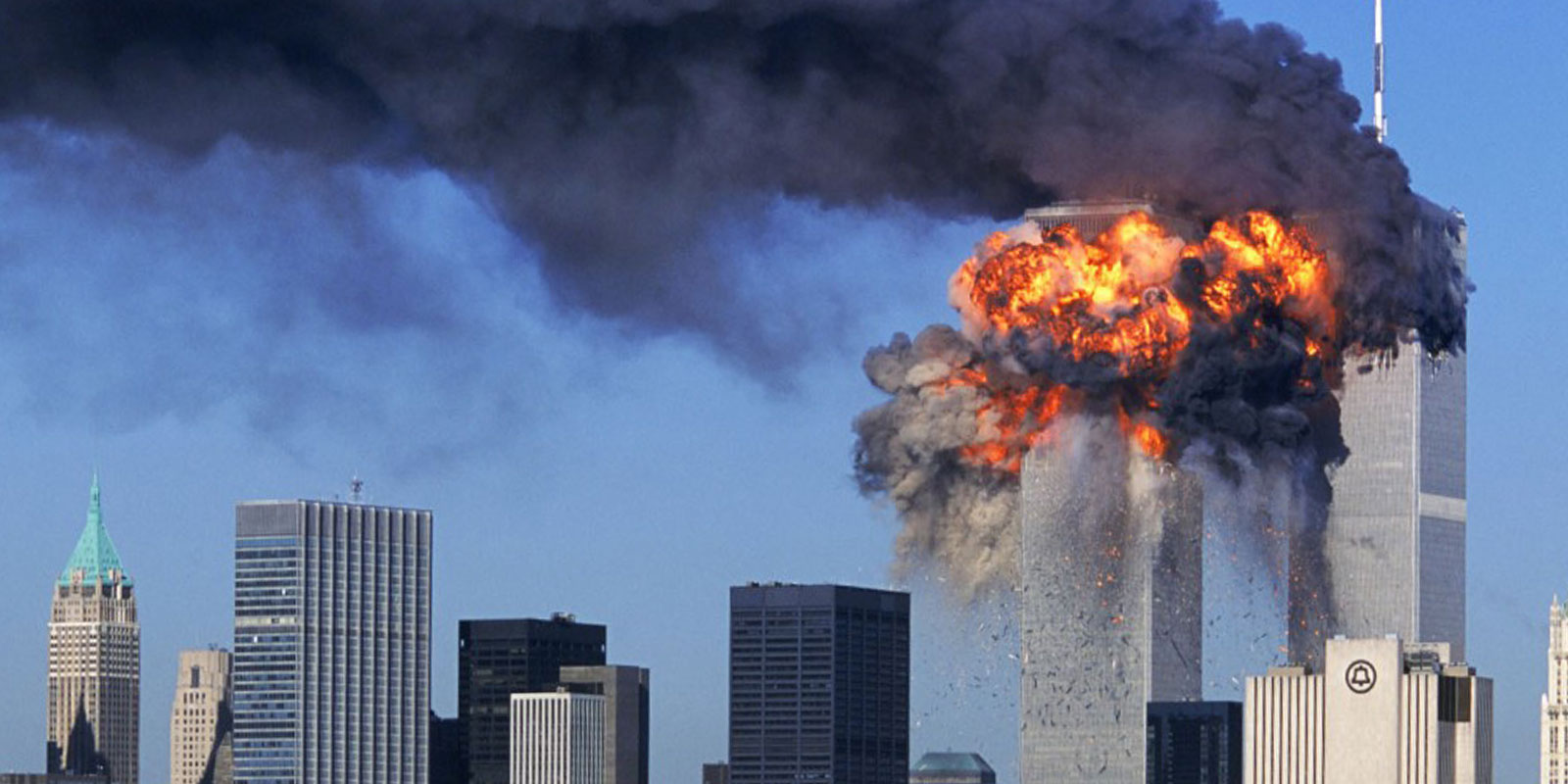 You never get over it. You get on with it.

John was a pilot in the US Airforce during the Vietnam War.  He flew the largest aircraft in our military, bringing material to our troops in Vietnam.  He also, often had to fly back the caskets with our heroes who lost their lives in the war effort.  After the war ended, John left the service with an honorable discharge.  As a civilian, he became a pilot for American Airlines.

John was at work doing his job when the unthinkable happened.  This beautiful morning, he taxied his plane down the runway and lifted off from Boston Logan.  The flight was to take him, his crew of 10 others, 76 passengers and unknowingly, 5 terrorists to Los Angeles.

After years in his job, Joe decided to pursue his dream and start his own business.  He looked around for locations and franchise opportunities.  Finally, he found what he was looking for and in the early 1970’s, he told his boss, who was also his good friend, that he was going to venture out on his own.  His store opened that fall with the fanfare of a local small radio station broadcasting from his parking lot.

No one will ever know just how the terrorists were able to break into the cockpit of this Boeing 767.  But the plane changed its course and headed for New York City.  It is unknown how John died, but he managed to engage the aircraft’s radio system to allow air traffic control to listen to the terrorists’ conversations in the aircraft’s cabin.  His flight was the first plane in the terrorist attack, crashing into the North Tower of the World Trade Center in New York City.

Back in Boston, John was happily married to Peg, and together they had three teenage daughters in private schools.  John’s brother, Jim lived nearby and was watching CNN as the attack on the Trade Centers was unfolding.  He phoned Peg asking if John was flying today.  Peg knew instantly; if a Boeing 767 left Boston for LAX, it would be her husband’s plane.

Peg went to her computer and tried to pull up info on Flight 11.  All the information was blacked out, but later flights were still available to see.  She called a friend in the flight department at American. “It was his flight, Peggy,” her friend said.  A bright and crisp day turned out to be the darkest day of her life.

John grew up on a farm, as did the three generations of men in his family before him.  John always wanted that to be part of his life and his family’s life.

There were two things in particular that he very much enjoyed: flying was one and farming was the other.  With his military life behind him and now a civilian, he set out to do both.

In 1978, he took a job as a pilot with American Airlines where he would spend the rest of his career.  The greatest perk he received while working for American was meeting a young flight attendant who would later be his future wife, Margaret (Peg.)  Over time, they bought a home and compiled 150 acres where he grew hay and vegetables.  He and his brother, Jim worked the farm.  John wore his pilot uniform 12 days and his jeans and flannel shirt the balance of the month.

When John was not flying, he was part of a local organization that matched immigrant farmers with mentors who would lease them small plots of land.  As a mentor, he would teach them farming methods in New England conditions.  Seven different immigrant families leased 12 acres from John, paying $200 a month, and all were seldom able to pay the rent.

John transitioned his farm into the first all-commercial “mentor farm,” a training site for beginning growers.  John and Jim were actively involved in every aspect of this new project.  They ploughed the immigrants’ plots, provided compost and supplies, and constructed irrigation systems for their planting.  They built a greenhouse for them, repaired machinery and equipment, while making themselves available to offer advice.

John was happy. He felt fulfilled.

John and Peg were the parents of three daughters.  When the unthinkable happened, all three were in middle school and high school.  The girls were sitting in their school classrooms that morning when they found out.

One daughter was asked to step out of the classroom, and her teacher told her directly, “your father was killed in a plane crash.”  Terrible “bedside manner” and a terrible way of hearing that your life will never be the same.

Peg was now part of the national media with camera crews on her front lawn.  As America’s worst terror attack came into everyone’s living rooms, Peg and her daughters’ fear were heightened and more involved.  How would they manage without John?  Peg is now a single, working parent of three young girls, with a mortgage on the house and the farm, and all the other revolving debt of autos, insurance, taxes, etc.  It was seemingly overwhelming.

The girls took it hard too.  Their loving father was gone, and what would their lives look like without him?  The little things that crawl into anyone’s head did with them too.  Will Mom lose the house, will we go to the same schools, will we be forced to move, will we go to college, will we be broke and poor?

Peg was still a flight attendant with American when John’s plane went down.  She and John always knew her salary alone would not be enough to support their three young daughters, pay the bills, and keep their farm going if something were to happen to John.

John met with his friend, a local agent, and purchased life insurance to supplement the insurance coverage provided by the airline.  With a simple needs analysis, they were able to calculate the amount of additional life insurance John needed.

A few days after 9/11, John’s friend Richard, an insurance agent, came by to offer condolences. Emotions were high, nerves were raw, and the events were still unfolding from the terrorist attack.

John and Peg’s oldest daughter asked whether they would have to move out of their home and leave their schools.  Richard explained to them all, “John loved you; he had made plans in case anything bad would happen, and you will be able to stay here at home and move forward together.”

When the insurance proceeds arrived, Peg followed their family plan.  She paid the mortgage on their home, paid off all of the debt on the farm, and set aside enough money for all three girls to go to college.  Today, the 150-acre family farm is still in business, operated by Jim.

John Ogonowski was from Dracut, Massachusetts, and the captain of American Airlines Flight 11.  He was an active member of the Dracut Grange, the Polish American Veterans Association, the American Legion, the Merrimack Valley Vietnam Veterans, the Board of Directors of the Massachusetts Farm Bureau, and the Dracut Historical Society.

His love for farming lives on.  The work he did with the immigrant farmers, mostly from Cambodia, has now become “The John Ogonowski and Doug Bereuter Farmer-to-Farmer Program.” This program provides assistance from local volunteers to developing countries with the goal of promoting sustainable improvements in food security, agricultural processing, production and marketing.

Peg was able to finish her career with American Airlines and retire after 30 years of service.  The three girls have never forgotten but have been able to move on.  Each of them finished college and continue to actively donate blood to the Red Cross in memory of their father.  Jim married a woman from a nearby farm and annually attends the John Ogonowski Memorial Scholarship event to hand out the award to the top Air Force ROTC cadet in the Junior Class.

At the National 9/11 Memorial, John Ogonowski is memorialized at the North Pool on Panel N-74.  His name is adjacent to the name of Kathleen A. Nicosia, a friend and flight attendant also killed on board AA Flight 11 that day.

Importantly, someone took the first step and asked the right question.  That simple question led to a meeting, some planning, and the purchase of enough life insurance to keep this family intact, find their way through their darkest moments, and have the life their father wanted for each of them.  How different would this entire story be for everyone if John had not met with Richard.  They did not need to rely on GoFundMe after the fact.  They had a successful, easy plan in put together in advance.