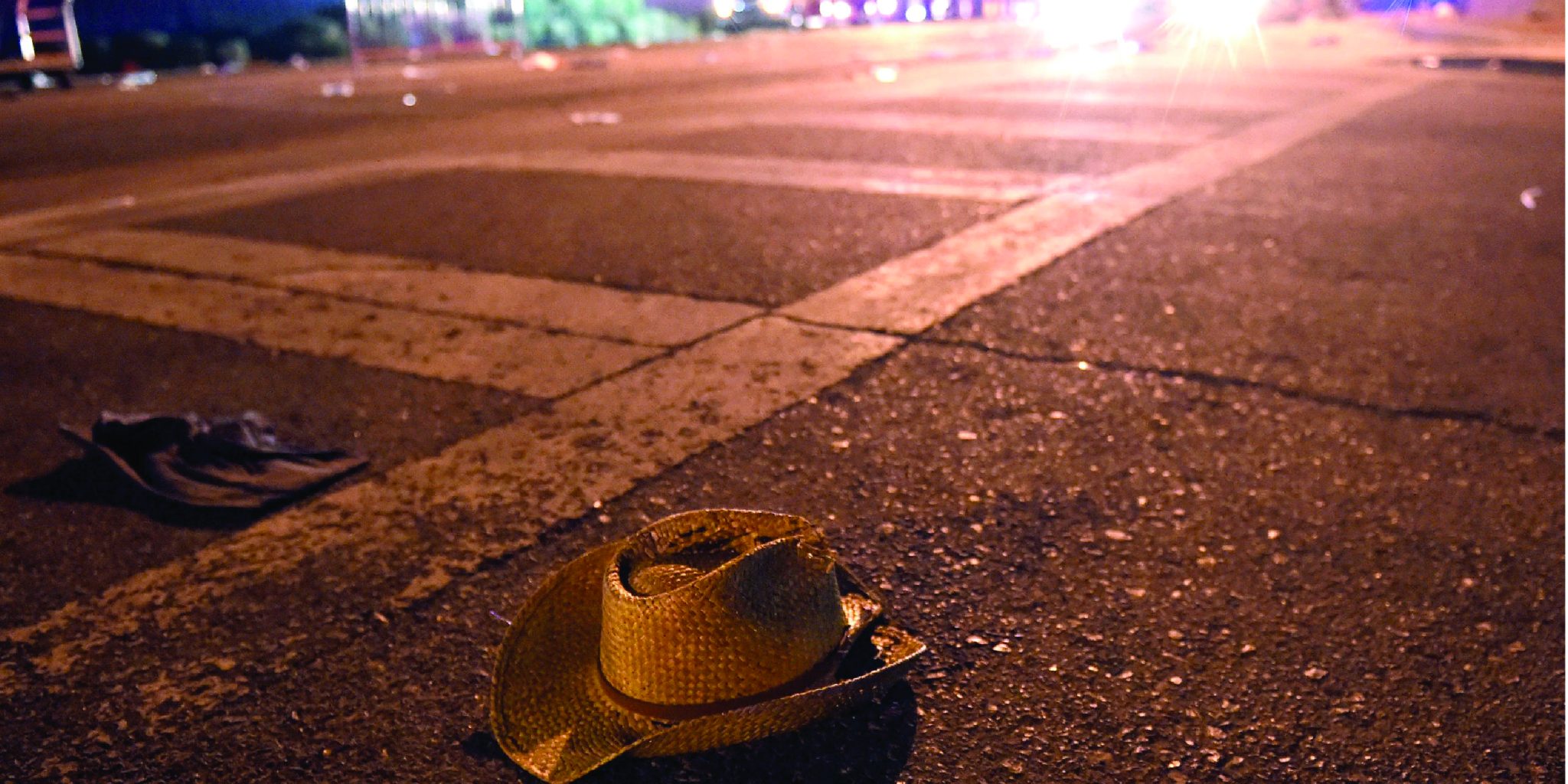 Four of the miles on Las Vegas Boulevard go through downtown Las Vegas, where it is unofficially called The Strip.  38 years after the name change, Live Nation Entertainment put on their first country music concert in Las Vegas and titled the event: Route 91 Harvest.

This concert event ran for four years before it came to a horrible end.

Three couples drove from Southern California and left a combined total of nine children with grandparents, friends, and family.  All three couples had purchased tickets together for what promised to be a fun weekend and a great concert.  The plans had been made well in advance on what to do, where to eat, what casinos to hit, and some inside wagering on who would be the biggest loser.  They all arrived early in the afternoon of Saturday, September 30th, checked in, and went out on The Strip.  It was a beautiful, warm evening under all the neon lights of Las Vegas.

On Sunday they were poolside, talking about how it was the first time many of them had been away and overnight without their kids.  There were multiple phone calls and texts from each of the parents in Vegas to their children at home, 250 miles away.  There were some tears, but that’s part of growing up. For Bryan and Haley, this was all bittersweet, as they were excited to see what would be the last event on the third and final night, Sunday, October 1st, 2017.

On Sunday, they left the pool for their rooms to get ready, gathering again later in the lobby before heading to the concert location.  They had bought good tickets and were very excited to see the five different entertainers.

The show was outstanding, with Jason Aldean taking the stage around 9:20 PM.  Towards the end of Jason’s sixth song, Bryan heard what seemed like a helicopter suddenly drop down on the concert.  The sound was instantly deafening, causing Bryan to instinctively look up for a helicopter.

There wasn’t any aircraft above; instead, there was a gunman: Stephen Paddock.  Unbeknownst to the 22,000 concertgoers, Paddock was 32 floors above the venue and letting loose a barrage of bullets from an automatic weapon.  Paddock had brought 23 firearms, some capable of firing 100 rounds without reloading, and used 15 from 10:05 PM to 10:15 PM.  Police later believe he fired 1,058 bullets down on the fans during his 10-minute rampage or over 100 shots every 60 seconds, which includes the time it takes to either reload or swap weapons.

Bryan was quickly looking everywhere, trying to determine where all the gunmen were.  Based on the sheer quantity of rounds and sounds, there had to be two, three, or four shooters.  For Bryan and Haley, each second seemed like an hour.  People were screaming and running in all directions, others were being shot and dropping to the ground.  It was hysteria and a fight for survival for everyone in attendance.

Bryan was pushing Haley towards the exit so they could get out.  Paddock was firing his weapon down a line and directly towards Bryan and Haley as they pushed forward and into harm’s way.  The people in front of Bryan had been shot and were dropping like dominos.  Paddock suddenly decided to move his fire in a different direction, leaving only the person in front of Haley alive.  All others were dead or had taken a bullet.  They had survived this round… barely.

This was now a war scene.  Paddock was in an optimum position to open fire.  He had unlimited rounds and no one firing back.  The people in attendance were in full panic mode.  Everyone was running, pushing, fighting for their own life.

Bryan and Haley were too.  They found their way out of the seating area and began to run for the exit.  Paddock had again changed his firing pattern, and the bullets were coming their way.  They could hear the change in sound and the people being hit screaming; it was getting very close.

The folding merchandise tables in the rear – that hours ago had salespeople promoting t-shirts, stickers, and posters of the bands and the concert – were now on their side, strewn haphazardly in the mayhem.  As the shots grew near, Bryan pushed his wife forward, yelling “GET DOWN!”  They both fell to the ground but on opposite sides of one of the folding tables.

The bullets seemed to go in a different direction; in the bedlam, Bryan got to his feet, somehow cleared a fence, and sprinted down the street.  He was in an apartment complex and pushed his way inside the nearest door.  Once inside he saw a female bleeding heavily from the leg.  Bryan’s mind was racing, trying to make sense of what was happening outside.  How many gunmen, where were they, were they coming his way, was he safe in this apartment?

He found a closet and hid, trying to get as small and quiet as he could.  Bryan called a buddy from work and said, “Vinnie, I’m going to die!”  Bryan then realized that he was alone.  Haley was not with him or in the apartment.  The last he saw of her was when they dove for cover on opposite sides of that table.  Not only Haley but his friends were all missing.  He tried calling Haley, but by now, no calls were going through.  He tried his friends, but it was the same; all lines went straight to voicemail.

The deafening sound was certainly not a helicopter coming in for a special effect at the concert.  There were not multiple gunmen.  This was a lone gunman with assault weapons, and the sound of the gunfire didn’t dissipate for what seemed like an eternity.  Bryan realized, he was alone and had left his wife out there.  Bryan was 6’3”, active in martial arts, and he had panicked.  She had not followed him, and his fear increased.

He tried again and again to call Haley, then tried all of his friends.  All the cells were overloaded, and no calls were going through.  20 very long minutes had gone by, and he did not know where any of his friends were or where his beautiful bride was.  The greater fear was, had they even made it out and survived, or was he the only one?

Sunrise Hospital and Medical Center in Las Vegas had prepared for this moment, but once it arrived, no one could believe it was true.  A doctor asked a police officer passing through the ER, “Hey, is this real?”  “YEAH, MAN!” the officer replied.  He then turned to a secretary at the front desk and told her to call every surgeon and scrub tech she could find.  “We need every operating room open.”  Six surgical residents there were told to stand ready.  Calls went out to the first branches of their phone trees, in the attempt to get as many as they could to quickly get to the hospital and assist.  Nurses cleared the emergency room and threw open the curtains to trauma bays.  Trauma surgeons pulled on their scrubs, and housekeepers rushed to find enough clean linens.

Hospital transporters brought every gurney and wheelchair they could find downstairs to the two curved drives that led to the ER’s sliding doors.  Rumors of a mass shooting were everywhere; at first there was one shooter, then two. They caught the shooter.  The shooters got away.  Nobody knew for sure.  Sunrise Hospital brought more than 100 doctors and 200 other staff into the hospital after the shooting, pleading for more manpower and resources to keep up with the demand.  Five chaplains stood by, hoping against the dismal ritual of death.  Then the sirens arrived, carrying their wounded.

At Sunrise Hospital, they used green tags for people shot and able to survive hours with water and pain medication.  Yellow tags for those shot in the chest or torso that would die within an hour.  Nurses watched over them for any drop in their vital signs.  Red tags had minutes to live and were sent straight to the hospital’s four trauma bays.  And at least 10 patients emerged from their makeshift ambulances without a pulse; they wore black tags.

In the aftermath, approximately 867 people were injured, 411 of them with gunshot wounds or shrapnel injuries, and 60 innocent people laid dead either on the grounds of Mandalay Bay or in local hospitals.  Sunrise Hospital had 16 people die in their hospital.  An immediate problem was identifying many of them.